Sabka Malik Ek – God is One

Auspicious Centennial Mahasamadhi celebrations interspersed with Puja rituals, Satcharita Parayan, Bhajans & Kirtans, NamaSaptah, Cultural programs, Ratha Yatra, Annakut and 100 Rivers water Abhishek enthused the participation of thousands of devotees from October 18th till October 20th at Shri Shirdi Sai Baba Mandir Chicago. This was once a lifetime opportunity to many Sai devotees because this was 100th Mahasamadhi of Shri Shridi Sai Baba. Shri Shirdi Sai Baba took Mahasamadhi on 15th October 1918 ( Tuesday ) on Vijayadasami day in 1918 and this year Vijayadasami was on 19th October ( Friday ), which marks the completion of One Hundred Years.

Please see below for detailed narrative on Mahasamadhi celebrations. 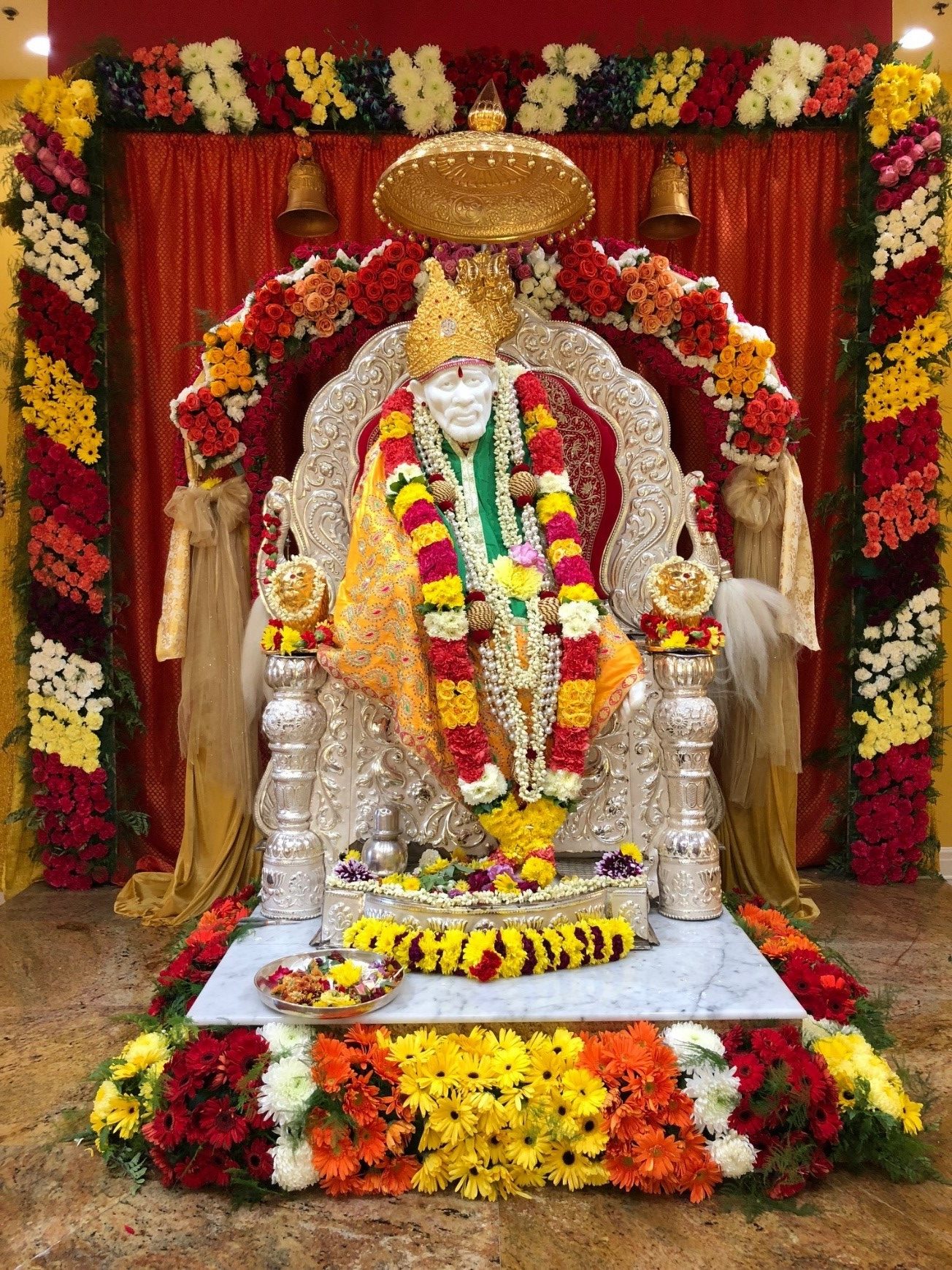 What is the significance of taking Mahasamadhi? Even years after His ‘ Final samadhi ‘ , there are innumerable instances of Baba exercising His powers, even as He did when He was alive, to appear physically in the form of ‘Fakirs’ and ‘Sadhus’ and disappears as suddenly and mysteriously, or appears in dream vision. Baba rightly declared, “ I shall be alive and vigorous from My Tomb also even after My so-called death. I shall be with you the moment you think of Me at any time and place. “ Baba stands by His word even today and that is called taking ‘ Samadhi’. It is ‘ death ‘ that is dead, but not Sai Baba of Shirdi.

Mahasamadhi Celebrations begun on Thursday October 18th and ended on Saturday October 20th with Friday October 19th being the Vijayadasami Mahasamadhi day. During these three days, there were many special events in Mandir such as Abhishek with 100 River Waters, Annakut with 100 items, Muktabhishekam, Pushpabhishekam, Bhiksha Jholi, Seemollanghan procession, Shatabdhi Aarati, Bhasmabhishekam etc. along with special cultural programs based on Sri Sai Satcharitra. Significance & short glimpse of each of these programs is explained in detail as follows :

Abhishekam Atmasuddhi: Participation in Abhishek grants purification – external and internal. On the auspicious occasion of 100th Mahasamadhi day, Abhishek was performed with 100 River Waters procured from all over the world including many tirthas such as Triveni Sangam, Chakratirtha in Naimisharanya, Akashaganga in Tirumala and Manasasarovar in Himalayas. Devotees got the opportunity to offer ‘Jal’ themselves along with their family on the 100th Mahasamadhi day at the Lotus Feet of Baba.

Pushpaabhishakam: The next day of taking Mahasamdhi on Vijayadasami day, Baba appeared in the dream of Dasaganu and asked him to cover His body with flowers. Participation in Pushpabhishekam blossoms one’s life like a flower and makes it fragrant. On Friday after the 100 river water Abhishek, Pushpaabhishakam was performed with many colorful & fragrant flowers to Shri Baba.

Muktaabhishakam: Mukta’ means ‘Pearl’.’Mukta’ also means ‘One who is liberated’. Those who perform abhishekam they shall become Mukta'(Liberated) later. After the Pushpabhishekam, Baba’s abhishek was performed with white pearls. It was a very unique event and witnessed for the first time by many devotees around the world.

Bhiksha Jholi: It is a well-known fact that Shri Sai Baba lived on alms collected from five houses daily in Shirdi. Sai Samsthan USA honored this tradition of Baba’s begging in Shirdi by selecting five devotees during the Maha Samadhi celebrations to seek alms from the devotees during the Seemollanghan procession.

Seemollanghan ( Crossing the border or tresspassing ): On Vijayadasami (Dasara) day, it is the tradition for the people of Maharashtra to cross the boundry of the village with pomp, exchanging the Shami leaves with the neighbors. In 1916, when people were returning from ‘Seemollanghan’ in the evening, Baba at once got into wild rage and threw His head gear, Kufni etc. into Dhuni and declared that was His ‘ Seemollanghan- Crossing the border ‘, indicating His Samadhi Day and transgressing the ‘ narrowmindedness of religious intolerance ‘ also teaching us to cross the border of ego, hatred, jeolousy and increase our mental perception that we all belong to one cast – ‘ Humanity ‘.

On the occasion of 100th Mahasamadhi day, special Shatabdi Aarati was performed to Baba. Sri Vishnu Sahasranama stotra is very dear to Baba. He said that even reading of one ‘Nama’ everyday will be very effective. During the centennial celebrations, we performed Sri Vishnu Sahasranama Nakshatra Samputikarana puja. This is very efficacious and grants remedy from evil planetary influences bestowing success, wealth and health.

Bhasmaabhishakam: Baba used to give Udi as Prasad to everyone indicating,“All this visible phenomena in the universe is as transient as the ashes. our bodies composed of matter of the five elements, after all their enjoyments are over and be reduced to ashes.” Sai Samsthan performed Abhishekam with Bhasma to Baba on auspicious Ekadashi day after the 100th Mahasamadhi day which bestows health, wealth, and prosperity.

As described in Chapter 38 of Sri Sai Satcharita, the devotees brought with them various articles for presentation and offered various dishes of food as Naivaidya. On this special occasion of 100th Mahasamadhi day, the devotees offered to Baba the Annakut with 100 items. The participation of the devotees in this Annakut group was enthusiastically overwhelming with sheer devotion. Apart from significance explained in ‘Sri Sai Satcharita’, there is lot of significance to ‘Annakut’. This has been explained in Ramayana, Bhagavata Purana (even to this day this is done in Brindavan near Govardhana Mountain) and done across in many Vishnu, Shiva, and Swami Narayan temples with great pomp and splendor.

For the devotees of Shri Shirdi Sai Baba Mandir Chicago, this year has added significance, as ‘Punaruddharana Kumbhabhishekam’ was celebrated on Guru Pournima day.